After more than two weeks of having done everything we were supposed to do to keep ourselves and the public safe -- social distancing, no going in public places even for groceries (which we've had delivered), no dining out for family celebrations, live conversations only from several feet away -- we reset everything this morning when we had to invite strangers in because we could hear that the animal in the exhaust vent was still there and trying frantically to get out. We had to call in local wildlife experts -- the humane ones, of course -- and they had to go on the roof and into the attic, then cut two holes in the bathroom drywall just to figure out where it was so they could lure it out. From the level of scratching on the ducts, we were betting that it had to be a squirrel, but it turned out to be a starling that flew out into the living room, where we then had to rescue it from Katniss, who jumped higher than we knew was possible to try to grab it before we shooed it out the back sliding door and it flew into the trees.

So $300 later, the bird was free, we didn't have to worry about a dead animal in our duct work, the space through which we believe the bird entered has been sealed, and now we just have to hope neither of the nice men who climbed all over inside and outside our house have anything contagious. Since this was the most excitement the cats have experienced in years, they slept the rest of the afternoon while we wiped down every surface the animal control guys touched or might have touched. Then Paul did a bunch of phone conferences and I scanned a bunch of 1998 photos, after which we went for a walk to the spring peepers and bluebells at Locust Grove. We had leftovers from the restaurants for dinner, then we watched the Heath Ledger Casanova on Vudu, partly because we really like the movie and partly because Vudu was giving out $2 credit for watching their free-on-demand movies leaving in March. Here's my day, including a frog and ducks at the park, cat supervision, and my new washable safety mask: 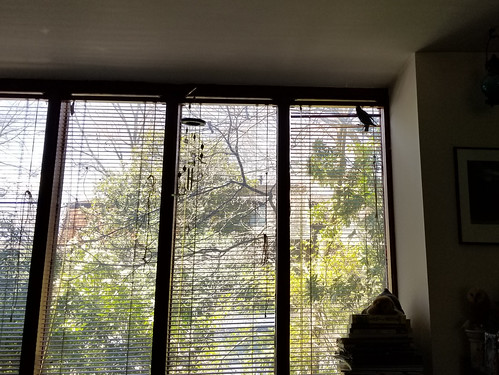