On Wednesday I took a shower, put on clothes that were not Cuddl Duds, got some insignificant writing done, and did a couple of small craft projects. Plus Paul and I took a walk in the early evening and the weather was lovely and there are still flowers. Oh, and I filled out the census online. I realize that these are very scant accomplishments compared to people who are running companies from home while also homeschooling, shopping for their elderly neighbors, and raising money to build factories to manufacture medical equipment, but I also know people who have been in pyjamas for two days watching that tiger show you couldn't pay me to watch, though I am in no way judging, just trying to establish that I'm as close to normal as I ever am, which is not very.

We watched the two-hour episode of The Masked Singer in which to no one's surprise That Patriots Player was unmasked -- I enjoy his enthusiasm but it's criminal that Chaka Khan was sent home before he was -- then an episode of Earth's Sacred Wonders on PBS, which made me worry how the people of Mali will rebuild the Djenné Mosque. Tonight Colbert beat out Fallon because of Ryan Reynolds, but I'm feeling quite fickle these days about late night. Tomorrow will be more exciting, since our Peapod order is arriving, and I am frankly more concerned about them having enough cat food than most human food, though they're out of Cherry Coke Zero and this may become distressing to me eventually if we can't source it elsewhere. Flowers from McCrillis Gardens last weekend: 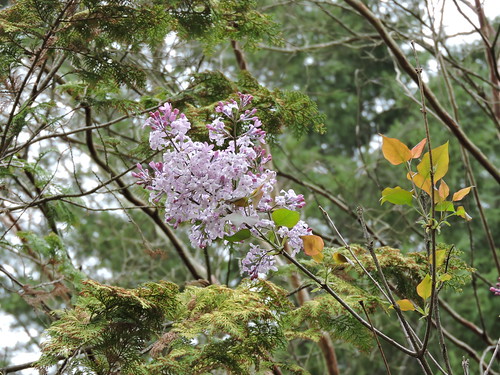