We took walks separately on Thursday because we were waiting for a Peapod delivery order, and, when a bunch of things on our list turned out to be unavailable, a Whole Foods order (no toilet paper anywhere online though we're okay next week, but I can't get veggie burgers anywhere and am starting to get worried). Otherwise, nothing exciting happened: I talked to a couple of friends on the phone and one, in London, via Google Hangouts, I did some more photo organizing, I did two Pokemon raids by myself.

The National Theatre streamed One Man, Two Guvnors with James Corden for free on their YouTube channel in the afternoon, and though we couldn't watch when it first aired because Paul had a phone conference, it's available all week so we watched in the evening. It's laugh-out-loud funny and translates well to the small screen! We also watched a Father Brown episode about a choir competition with lots of relaxing Anglican hymns and no murders. Here are some C&O Canal bluebells: 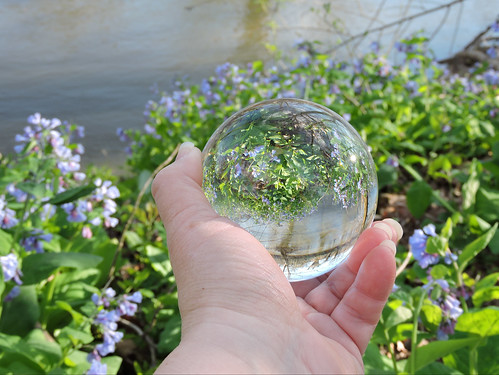