Chag Pesach Sameach! My sister's family organized an extended family seder on Zoom that ended up including Nicole, Harris, and their daughters in suburban New York, our parents, myself and Paul in the DC area, Harris's parents in Florida, Harris's sister and her husband and kids in New York, and Adam and Katherine in San Francisco where it was still the middle of the workday (Daniel was on a phone conference at work, where he's not allowed to put Zoom on his computer because of security issues). Paul had made charoset and potato kugel, and we had eggs, parsley, horseradish, and flourless cake (we only had a drawing of a shank bone, but it's not like I've eaten meat in decades anyway). It was a very short seder with an emphasis on the four glasses of wine, and you can see that my mother had a frog on her head to represent the plagues other than the one we're all living through now: 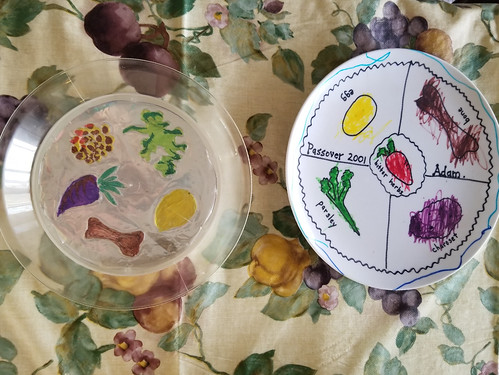 It was otherwise a reasonably good day, gorgeous weather so we had the doors open all afternoon, lots of neighborhood flowers around. I should probably not admit this on the first night of Passover, but we had fresh bagels delivered, yay! (We aren't even pretending to keep the feast of unleavened bread; we're not throwing out what chametz we have in the house now when we can't replace it.) I am greatly relieved that Bernie Sanders is suspending his campaign, since there's no way he was going to get the nomination and it's outrageous that Democrats have been forced to vote in unsafe conditions like Wisconsin this week (Maryland thankfully has already enabled absentee voting for everyone). We watched The Masked Singer, which I think made the right choice for a change, and LEGO Masters, on which everyone's Star Wars scenes were pretty awesome and I'm glad they decided not to eliminate anyone else before the finale.
Collapse