My desktop and I are at war. I have threatened it with a hammer but it's not intimidated, since it knows I can't replace it right now and I won't really smash it until I can. So I was unproductive and now my cats are looking at me like I'm weird, which is not fair because most of them spent hours licking their own butts.

We watched two episodes of Antiques Roadshow, then caught up on Sunday's Zoey's Extraordinary Playlist, which is the most enraging show. They do beautiful things like the scene at the end with her parents but mostly it is entirely about man pain, especially Max's whom I loathe; I don't even think this week passed the Bechdel Test.

Here are some photos I did manage to get scanned today from Disneyland in 2000, including Pirates of the Caribbean before Pirates of the Caribbean, Mickey and Minnie Mouse greeting us, Aladdin and Jasmine posing with us, Daniel pulling the sword from the stone, and my kids, who thought the barrows near Avebury were just as happy a place: 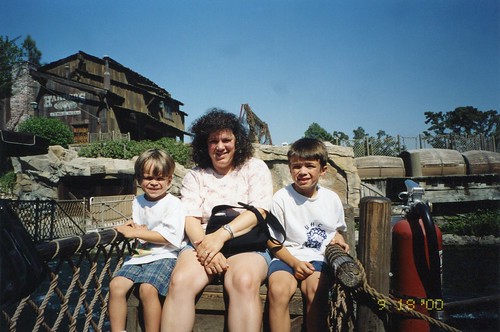