Not much worth reporting happened on Tuesday. It was lovely and sunny, then it rained for a while, then it was lovely and breezy and we took a walk to enjoy it. We got yet another delivery from Target with a snack bag exploded open in the box -- this time it was Cheetos instead of potato chips as if they'd been used as packing peanuts for the cat food in the same order. My computer tried to misbehave and I tried turning it off and on, which was not a satisfactory solution.

We didn't realize the CW had new episodes on until it was too late, so instead we watched the second episode of Run, which I'm not sure I'll stick with -- I don't really like the main characters or their problems of privilege, and if they turn out to be seriously mentally ill, it will just be sad -- then we watched Let's Go Crazy, the Grammy tribute to Prince, which was great. Here are some photos of my sons visiting their paternal grandparents in Connecticut 19 years ago: 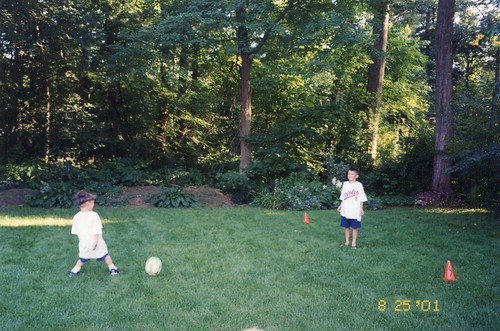