Friday was rainy and uneventful with only moderate computer woes. I finished scanning 1997 and moved on to 1996, a year in which we took a lot of photos because we had a baby but didn't have time to organize them because we had a baby, so quite a bit of the project at this point is figuring out what goes in which folder. We did, eventually, take a walk to enjoy the damp azaleas in the neighborhood, and when we got home our cats acted like we'd been gone for eight hours and no one had fed them in all that time.

We watched Love Never Dies on Andrew Lloyd Webber's streaming channel, whose plot has not improved since I last saw it but which still has some lovely songs. (Are we to assume that the Phantom and Raoul moved in together to raise Gustave, who obviously must have grown up to be a serial killer?) Then we watched the finale of The Plot Against America, which was not low-stress or relaxing but I was glad Bess told Evelyn what she did. Since I posted Adam's dog yesterday, here are our cats in quarantine: 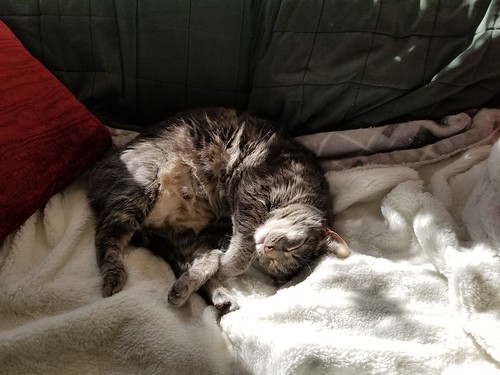