Monday was pretty quiet around here -- laundry and basement organizing, lots of photo scanning that required taking apart and restoring the album with Adam's first photos, leftovers for lunch, veggie sausage for dinner -- though we did take a walk to enjoy the gorgeous no-longer-rainy cool weather, since our neighborhood is still at peak azalea bloom. Several people have apparently decided they no longer need to keep dogs on leashes or cats indoors, which is irritating me even though I love dogs and cats.

We watched this week's Antiques Roadshow -- ever since the Winterthur episodes, I'm suddenly really interested in where they film and why and whose items they pick to discuss -- and last week's Legends of Tomorrow, so we can watch the new one tomorrow (we're behind on The Flash but we're watching the Secrets of the Dead Notre Dame episode on PBS in that hour, so we'll catch up later). I know it's the wrong season but here from the scanning project are photos from Butler's Orchard's pumpkin festival in 1996: 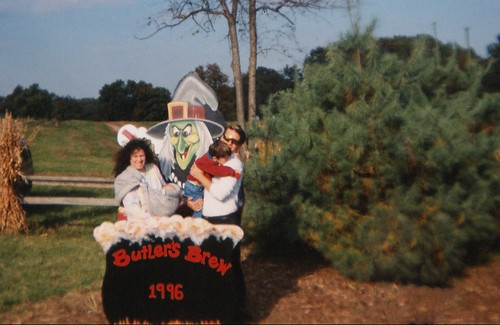