On Tuesday I hit a weird gap in my photo scanning, and then I realized why: the photos from Starfest 1996 were not with my family photos but down the basement with my Star Trek photos. So I got out the 12 Trek albums and spent the entire day pulling out the photos I wanted to scan, then replacing the ones I wanted to keep. It will surprise no one whom I've known for a long time that I have several hundred photos of Kate Mulgrew, of which precisely two were taken by me (both of her with Paul and Daniel at the aforementioned Starfest 1996). I scanned maybe 15 photos with Kate and 100 of friends, fellow fans, KMAS members crowded together in hotel beds, and a few other Star Trek actors (Louise Fletcher <3).

Because I was feeling nostalgic, I checked in with a couple of friends from Voyager days and got to talk on the phone with a couple of them, which was lovely. Even though we tried to catch up on our WB shows before this evening, we ended up watching Inside the Vatican -- I blame The New Pope in large part -- after the Secrets of the Dead episode about Notre Dame on PBS, which was fascinating, lots of information about how wood was originally used in the construction and lots of information about how Viollet-le-Duc planned the cathedral's restoration, including the spire destroyed in the fire last year. I don't have the Star Trek photos uploaded to Flickr yet, so instead here are some more of my cats! 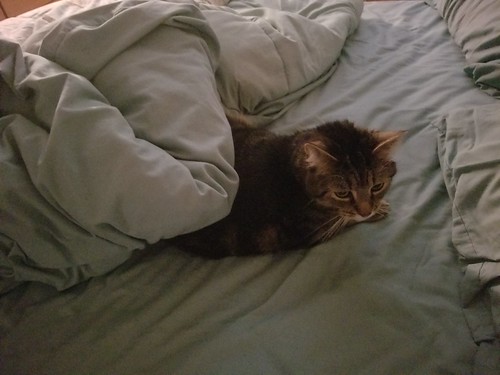