The only thing that happened of note on Wednesday was that my oldest phone died. I have a Galaxy S4, S6, and S8, and I use the first two only for playing Pokemon, but it's harder to raid without that baby account, so I asked Adam whether I could have the old phone in his room and he said it was fine. So I spent an hour taking off his programs and installing mine, and now I can fail to catch Darkrais again.

Otherwise, my day involved a bunch of scanning, two walks in the woods because it was warm and beautiful out, an hour of The Masked Singer (I was on the phone with my college roommate during After the Mask), and this week's What We Do in the Shadows (funny but no Superb Owl). Since I said I would yesterday, here are some photos from Starfest Denver 1996 with several people who are still my very dear friends! 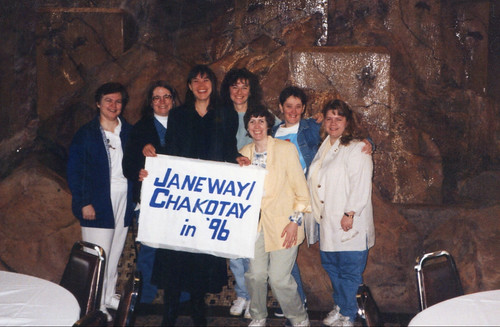