It rained pretty much all day Thursday and a lot of people pissed me off (sparkling misogyny in politics, passive aggressive and entitled behavior elsewhere) so by afternoon when Paul was done with his phone conferences, we decided to take advantage of Vudu's "watch a free movie, get a $2 credit" offer and put on both Journey to the Center of the Earth and The Mysterious Island, which had laughable special effects and pretty dorky plots but were definitely mood-lifters.

The rain continued through dinner until after dark, when we watched the first iteration of the National Theatre's Frankenstein, in which Benedict Cumberbatch plays the Monster and Jonny Lee Miller plays Frankenstein. The Monster's role looks utterly exhausting so I see why they switched off, and I look forward to seeing Miller play the Monster tomorrow! I got less scanning done than previous days, so here are a few photos from my hospital stay after younger son was born: 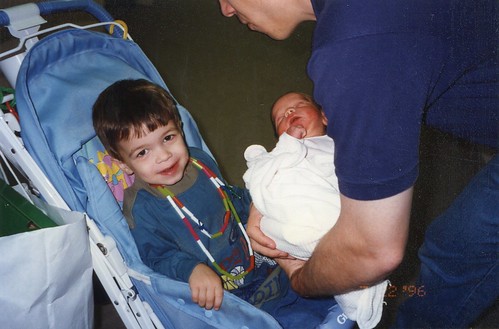