After the months-long end of April, the first of May was a gorgeous day, sunny and not too warm! I guess I should feel nostalgic now that time again feels like elementary school, when I never knew how I was going to get through an average Wednesday in fourth grade, and, if I did, how I was then going to get through Thursday, and Friday, and the next week, and the next month, and fifth grade would never arrive let alone junior high school. At least I got a lot of work done, plus I would even have folded the laundry had Effie not been sleeping in the laundry basket. (Also, I would have made the bed earlier had Effie not been sleeping on it when I got up.) We took a walk, after which Paul made quiche for dinner since it was Beltane.

Then we watched the second variation of the National Theatre's Frankenstein, this time with Benedict Cumberbatch as the doctor and Jonny Lee Miller as the monster. It was fascinating to see the differences in interpretation right from the start (Miller less expressive learning to stand but more so grunting), though I think I preferred it the other way around: I appreciated Cumberbatch's physicality as the monster and Miller has better chemistry as Frankenstein with Naomie Harris. Afterward, we watched the second half of Joe vs. the Volcano from the other night. My favorite thing we watched, though, was probably the Good Omens anniversary quarantine video with Tennant and Sheen! Here are some 1996 photos of Daniel enjoying the pool: 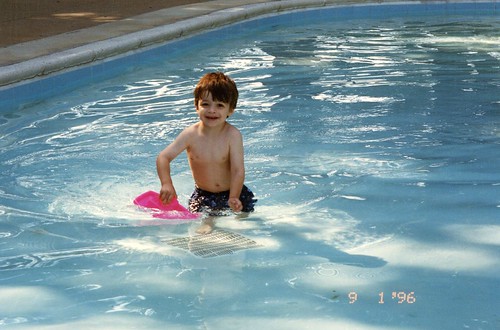