I had a virtual lunch over Skype on Tuesday with a local friend I've known since elementary school, over the course of which we discussed sourdough starter, socially distanced walks, and medical catastrophes, which was so much fun that we're going to do it again in a few days with a non-local friend we've both been friends with longer than we've really known each other! So that was fun, and it was a gorgeous afternoon until the rain arrived so I got to take a long post-work-hours walk with Paul.

We watched The Queen at War on PBS, which was very satisfying because it had lots of George VI, then Legends of Tomorrow, which wasn't my favorite because of an animal issue but has lots of awesome women, then the season premiere of Billions, which really needs to do a quarantine episode, preferably with Chuck, Wendy, Ax, Taylor, Wags, and Chuck's dad locked in a house together. From my photo project, here are my kids at the Smithsonian with my dad, happy about having giant lollipops: 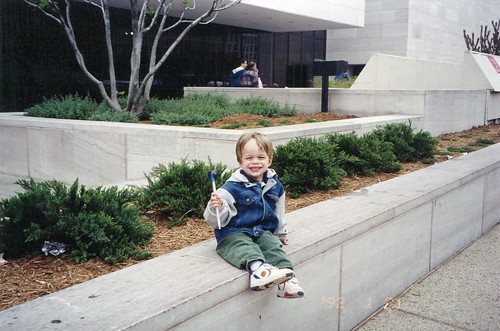