On Thursday my computer finally finished synchronizing everything from my Google Drive and backup hard drive, so I could get back to my photo scanning project once I was done writing various things. I'm about a quarter of a way through 1994, the point where I have to take apart albums to get out the photos to scan, which will keep them safe from plastic pages but I wonder whether I'll ever look at the physical photos again. We took a walk because it was gorgeous out -- no bunnies but the deer were back in the same spot in the woods -- and ate early so we could have a Zoom family call that ended up including my parents, Adam, my Uncle Mickey, his children Felicia, Allison, and Garrett, and some spouses and children wandering through.

Plus I talked to my sister, Nicole, on the phone. Blindspot was back in the evening, sadly having killed off a character I really liked (and I'm not sure I'm in the mood for a giant government conspiracy, I miss the first season when it was specific storylines about Jane and Kurt. Afterward, we watched the first episode of Hollywood, in large part for Patti LuPone and not the male nudity though there was plenty of eye candy, but I can already tell the show romanticizes both a Hollywood era (no racism, really?) and prostitution, so I'm not sure how long watching the series will last. I feel like I really did not properly enjoy the cherry blossoms this spring, so here are some photos from back when were still visiting local parks: 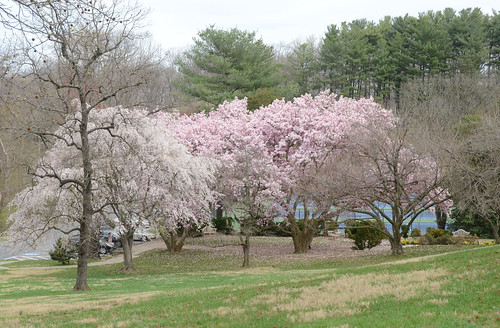