Monday was not an exciting quarantine day, particularly since my back was really bothering me the way it did three years ago which is making me crazy because I probably can't get PT even if I feel like I really need it. I did a bit of computer work, I took apart a 1993-4 photo album that overlapped with the 1993 baby album so I had to sort a bunch of photos before I scanned them, I did a lot of scanning, I did a bunch of stretches. Paul made some kind of balsamic chick'n with feta for dinner that was awesome, plus, since we still have matzah from Passover, charoset, which I love.

We caught up on Batwoman (I don't care about Hush, more female villains please) and Supergirl (I have lots of minor gripes but it's all worth it when Lena comes back to Kara and whyyy did they not kiss in "It's a Super Life" and please Sean Astin don't be evil), then we just couldn't get in the mood for more mediocre superheroes so instead of catching up on The Flash, we watched another episode of Hollywood, which is shaping up to be a train wreck but OMG Patti LuPone. From today's scans, the Wisconsin Deer Park in the Wisconsin Dells -- they also have some farm animals and lots of petting! 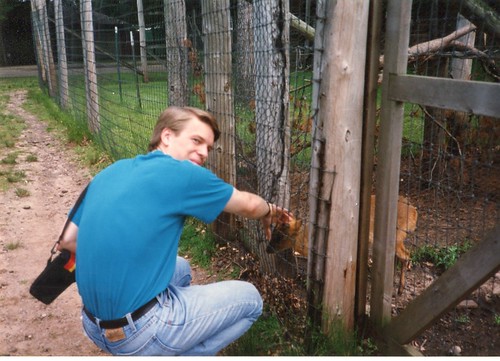