One of my cats just got sick all over the house so I'll keep this short. It was not an eventful Monday anyway: laundry, a little writing, a bunch of scanning (wow, we took a lot of photos right after older son was born, and by "we" I primarily mean my mother), organizing my new photo boxes from Michael's bought to replace the horrible magnetic albums I should have listened to people and gotten rid of 20 years ago because I'm betting the glue residue on the backs of the photos ruins the photos they touch.

We took a walk, had tacos for Taco Tuesday, and skipped DC superheroes to watch 24 Hours to Hell and Back because Gordon Ramsay took his team to Ellicott City to help rebuild three establishments after the floods that devastated the historic district over the past few years; he enlisted the governor, the University of Maryland football team, Cal Ripken, and the Ravens to appear, so it was great for the city. Here as promised are some of the geese and goslings we saw at Lake Whetstone on Mother's Day: 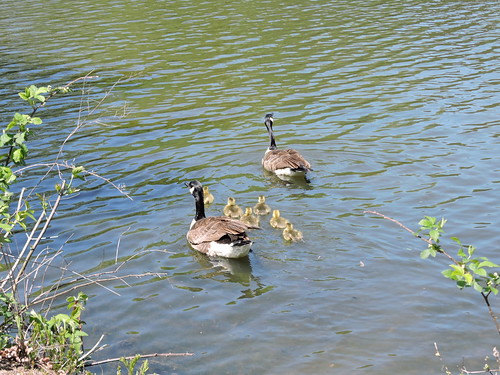