We had a fairly quiet family-oriented Memorial Day, albeit a distanced one. In the morning, while Paul made hamburger buns out of sourdough starter, I finished scanning the photos from my earliest album, so I have digitized nearly all the personal photos in this house except a few in frames, our wedding album, and the kids' Bar Mitzvah albums. So at least I got that done in quarantine! It was another gorgeous not-too-hot day, so in the afternoon we took a walk on the main Cabin John Park trail. Before dinner, Paul's parents wanted to Skype again, so we talked to them for a while.

We ate (Beyond) burgers, macaroni salad, and potato salad before Skyping with our kids, Daniel's girlfriend, and my parents. Adam's girlfriend got laid off along with most of her division last week, so their plans are very up in the air after their lease runs out -- they would like to move out of the city and probably the San Francisco area. I'm hoping it's possible to visit them again before they do. We watched this week's Billions and the first episode of I Know This Much Is True, which were depressing in different ways. Here are some photos of the gorgeous Canadian Rockies from a 1986 trip: 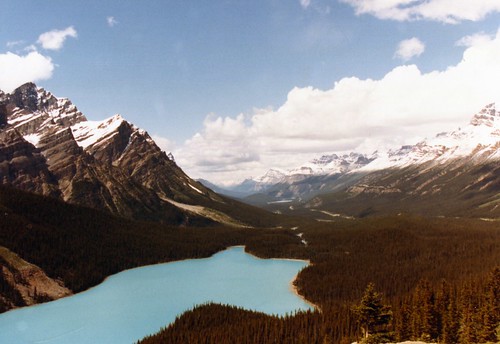