Friday was warm and humid and pretty quiet for most of the day, though we did have to run out to the UPS Store to drop off a contactless return, so that's the first shopping area I've been in for I don't even know how many weeks though I didn't even get out of the car. I did a long lunchtime chat with three high school friends, which was awesome, and I passed a neighbor whom I'd seen playing Pokemon while we were out walking and we ended up doing a socially distanced Reshiram raid together. In between I got a bunch of scanning done.

We spent the evening after dinner (leftover pizza) bingeing a bunch of episodes of Space Force, which is funny and has lots of great actors and many socially relevant moments, but my affection is at a pretty superficial level -- I wasn't writing down lines to quote -- and I have to admit that my favorite moment so far has been Jane Lynch threatening to sodomize Steve Carell for referring to her gender inappropriately. From 1986, some photos of the famous Banff Springs Hotel, which I didn't care back then that George VI had visited: 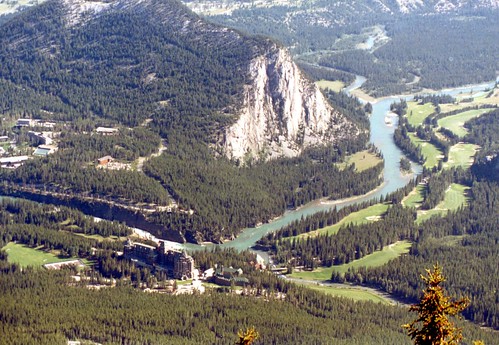