Tuesday was exhausting, and I'm saying that as someone who only watched the terrible parts from a distance -- I have so much admiration for and rage on behalf of the protestors. It wasn't a bad day here otherwise: having finished the personal photo scanning project of doom, though I still have a whole bunch of editing to do, I started to tackle the basement filing cabinets which have papers and documents dating back to when I was in high school. The first drawer I encountered was all baby stuff: lamaze, hospital forms, La Leche information, lots of warranties and instructions for equipment and toys. It's all getting recycled, since most of it is out of date and some of the equipment has been recalled.

We took a walk in the afternoon since it was gorgeous today and is supposed to be atrociously hot here the next two days, then had veggie burgers for dinner. I needed a break from the real world, so watched Stargirl, which gets better as more characters get involved, and the season finale of Legends of Tomorrow, which had some truly glorious moments ("I played hooky at Hogwarts, I learned magic the hard way, in Hell!"), followed by some more fifth season Arrested Development (in which G.O.B. can't tell the difference between tainting someone's brand and branding someone's taint). Here are a mother wood duck and her ducklings in the canal last weekend, a calming sight to end Blackout Tuesday: 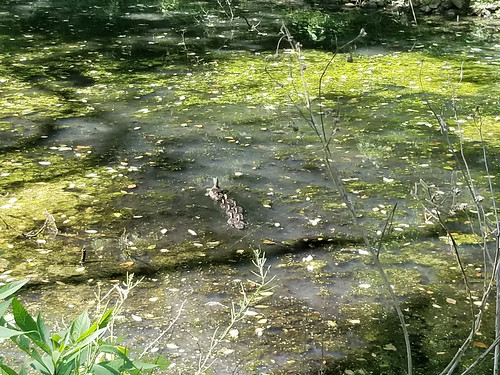