I had a pretty quiet Friday -- chatted with a couple of high school friends virtually at lunchtime, fought with a program to merge JPGs into a PDF file but was ultimately successful so that will be very valuable for the Scanning and Dumping project, watched the Duchess of Cornwall read from James and the Giant Peach, took a walk just before the massive storms that we've had all night arrived in the early evening, blocking our view of the strawberry moon.

We watched the National Theatre at Home's broadcast of the Donmar Warehouse Coriolanus with Tom Hiddleston, which is excellent, superbly acted, riveting even on TV with minimal sets, a relevant portrait of entitlement while DC is full of unauthorized police from the Federal Bureau of Prisons under the command of a dictator telling himself he was chosen by the mob. Here are some photos from the first time I was ever in Seattle, en route to Canada in 1986: 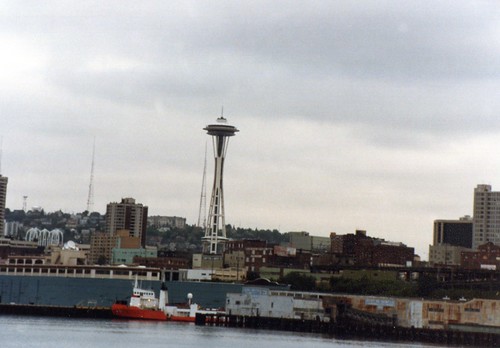