All spring we have had a pair of Carolina wrens living in our covered bird feeder suspended from the deck overhang -- we've had the feeder for nearly 20 years but we've never had birds move into it before! We went to put seed in it one day and discovered a nest with three little eggs, which I had suspected was there because I kept seeing a bird flying in and out of it. For weeks we've watched the wrens coming and going, bringing nest twigs and whatever they feed the babies. In the past couple of days, there has been a lot of peeping and flapping inside the nest, and today the babies emerged, hopped around awkwardly on the deck for a little while, then flew off with their squawking parents. None of them has come back -- apparently they only live in nests while there are babies.

So although we're going to leave the feeder alone for a few days in case the parents decide to lay more eggs, which they sometimes do if it's early enough in the season, we are officially empty nesters! Which is both lovely, since the babies look so healthy, and sad, since I can see the feeder from my desk and I've been watching and listening to the wrens singing for the entire shutdown -- it's so quiet out there now. That was most of the excitement for the day, apart from scanning my Bat Mitzvah album which I borrowed from my parents the other night. Now we're watching the extended version of The Return of the King, which I haven't seen in ages (and was angry at the last time I watched any version because of The Hobbit), and this franchise really is as good as I first thought it was. 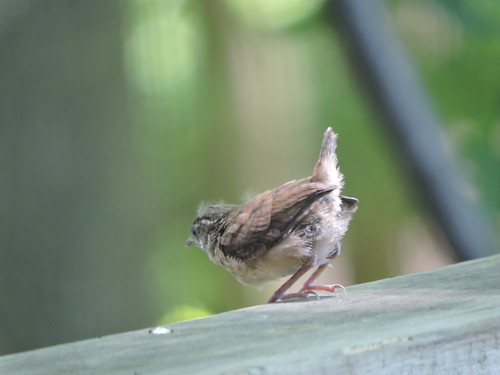