Quickie, we watched Artemis Fowl on Disney+ and then A Wrinkle in Time came on and we figured we'd watch that too. Oddly enough, I'm enjoying them about equally, considering that one is based on a book I never read and one is based on a book I read dozens of times in my childhood and for a long time after continued to reread every year. Artemis has well-done creature graphics and world-building and I like some of the characters, but I feel simultaneously like there's way too much telling-not-showing -- I don't like the structure of having a narrator explain so much -- and at the same time a huge amount left out, like the point of the Artifact of Power and the identity of the Big Bad. With Wrinkle, I appreciated that certain elements needed to be updated and I liked all the performances, but it felt very disconnected from the parts of the story that had resonated most with me and I really found the stunt casting of the Mrs.s distracting.

I had a nice day otherwise: some chores in the morning, including cleaning out the bird feeder since it seems apparent that the wrens are not coming back to the nest they made in it, then after lunch we went to walk along the canal, which once again was full of singing frogs, duckweed-covered turtles, a few ducks including one with ducklings, and various other lovely flora and fauna with not too many people (for which I was grateful because apparently Great Falls was so crowded that they had to close the parking lots). Then we had dinner with my parents, socially distanced on their deck -- they ordered food from the Silver Diner, including apple pie. When we got home, both our kids said they could Skype, so we got to catch up with them (not much news, they're between protests and shutdowns, older son is trying to figure out whether to go back to his gym when it reopens). A few photos from the canal and my parents' deck: 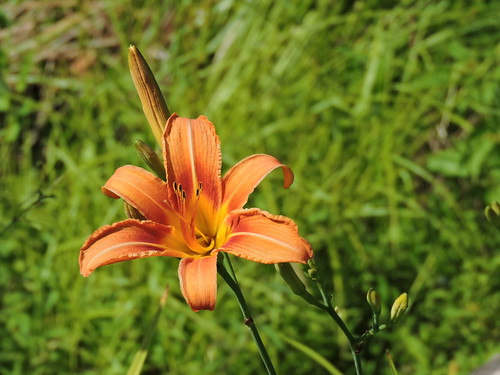