Earlier this week I got the unhappy news that Mirch Masala, the Indian restaurant in the Montgomery Mall food court with the best samosa chaat in my area, would be closing at the end of the month. So for lunch, we ordered it from GrubHub and it made me both happy to have it and sad that I won't ever have it again. In the middle of the night last night, I realized that some missing photos that were driving me nuts were in frames down the basement where we moved them when we had flooding upstairs, so I scanned those, then we took a walk in the late afternoon that we had to cut short because we had a hailstorm, followed by half a rainbow: 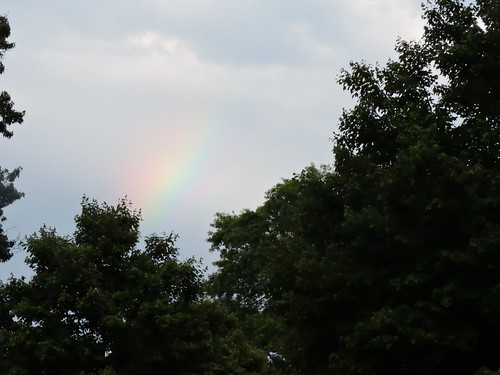 We had sandwiches for dinner since we'd had such a big lunch, then I spent a lot of the evening engaged in what has been a heated discussion about the name of my high school in its alumni group. Winston Churchill was indeed a racist and imperialist, though in our county we have several schools named for far less important statesmen who owned slaves and supported violent segregationist policies, so I said maybe we should consider not naming schools for people but for their neighborhoods and only got moderately trolled. I was a bit distracted while watching Burden of Truth and Blindspot (both with a lot of female characters I like).
Collapse