Thursday was pretty uneventful apart from household chores and some writing. It was hot but nice out, we took a nice walk before dinner, with bunnies in evidence and also a neighbor's son having a hysterical meltdown because his father wouldn't let him sit in the car in the afternoon heat and pretend to drive, which was pretty amusing since I was not responsible.

We ate leftover tacos for dinner and watched what I thought was the two-hour season finale of Blindspot, only to find out that it has one more episode in a couple of weeks! At least the show isn't ending on a cliffhanger, and a character I really wanted not to be dead isn't. Here are some of the fiddler crabs we saw in the Burton Island Nature Preserve swamp: 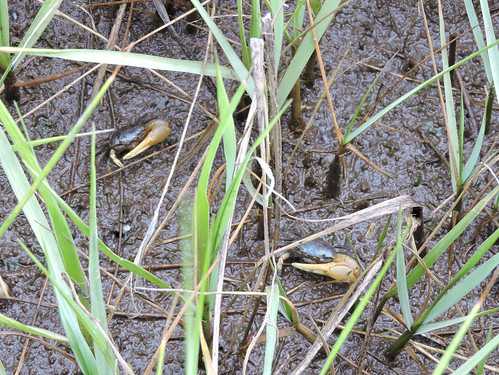