Running late because I had a very Pokemon-themed day: met friends for a socially distanced raid in our cars at Cabin John Park, met friend for a socially distanced raid on the sidewalk in the neighborhood, and finally just now defeated Giovanni (after we saw the live show when our kids were very young, we kept walking around saying "No, Ash, I am your father"), but my real excitement was seeing Team Rocket's Meowth balloon fly over my house and getting to battle Jessie and James, which I've wanted to do since the day I put Pokemon Go on my phone so I could try to play long distance with my kids.

It was otherwise a nice day in general anyway, though beastly hot. I only got little projects done and several not-done, but I had a lovely chat with six friends from high school, the most we've had in this chat group before, and then more chat with two of them because we hadn't talked in a couple of weeks. We caught up this evening on the season finale of Burden of Truth because we missed it during the double-episode Blindspot, and they left it in a nice place if it ends up being the series finale as well. I'm in an "Egrets, I've had a few" mood, so here are a few we saw in Delaware last week: 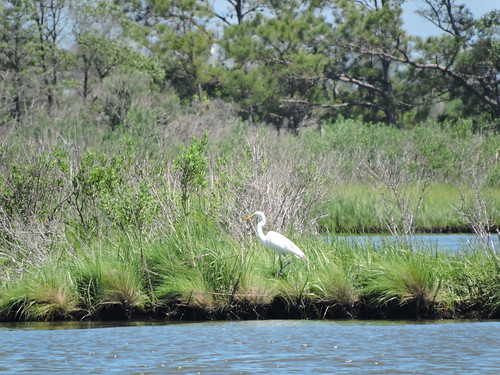