Sorry no poem, I'm behind! My area was under a heat warning for Sunday, so although we thought about going for a short walk somewhere shady, we ended up spending the whole day indoors. It was a Pokemon Community Day, so since I can reach the Pokestop at the playground behind our house from my computer, I fiddled with photos and caught Gastlys for a while, then had lunch, did some chores, and spent the rest of the day on two long Zoom/Skype calls -- one with fannish friends, one with my parents, Paul's parents, and both kids plus Daniel's girlfriend for most of the call and Adam's girlfriend at the very end (it's his birthday tomorrow but she won't be back in San Francisco until Wednesday).

We watched this week's Perry Mason, which was thankfully more about characters and less gory than previous weeks, then we watched the Iceland episode of Down to Earth with Zac Efron because my friend whose family is from Iceland had recommended it and it was a lot of fun to see places we visited last year, including the inside of the geothermal power plant we only saw from the outside. I'll sort out more exciting photos tomorrow, meanwhile here are the blueberry (faux) chicken Paul made for dinner, the burgers Daniel made for dinner, a gorgeous illustrated copy of Peter Pan that Veronica sent me, my new nautical dice tray and dice with shells, and a Skype screen shot: 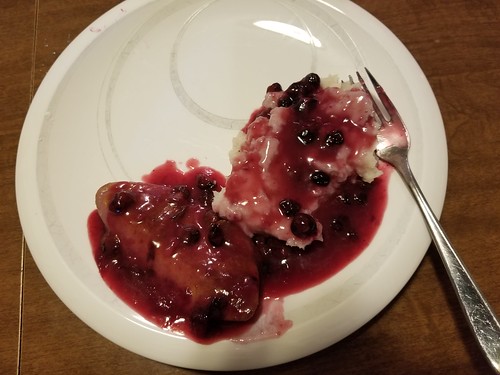