Quickie, it's Adam's birthday and I ran late tonight messaging him to try to coordinate having dinner and presents delivered when Amazon apparently had trouble with his building's loading dock and the restaurant had to coordinate dropping off food with the main desk. It sounds like he had a fairly quiet birthday, since he had to work and since Katherine is still visiting her family in Virginia, but he worked on a project with a friend from high school and it sounds like the food was good!

We had a quiet day here in 100-degree heat -- I only walked outside during the thunderstorm, at the end when the sun came out, though apparently it wasn't at the right angle for me to see a rainbow. We watched Rasputin, which is on YouTube somewhat fuzzily but mostly complete -- I haven't seen it in over a decade so that was entertaining even if Rickman and McKellen are far kinder to Rasputin and the Czar than either deserves. Since I have only one photo from this birthday, here are a few from earlier ones as well: 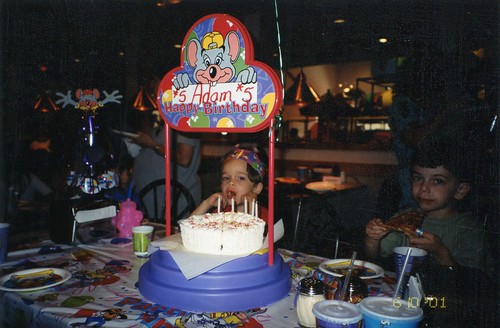