Thursday morning was hot and humid but not as intolerable as earlier in the week. I did a bunch of chores and a bunch of scanning, including a couple of papers from college I'd typed on my typewriter before I had a computer that I found in a folder with Shakespeare souvenirs, then I went looking for some articles I'd written years ago and instead found a box of cards and letters from Kate Mulgrew fans from my KMAS days, many of which were fantastic and will need to be on the "to be scanned" list. We took a walk in the late afternoon and ate dinner early.

We kept that schedule so we could watch the first baseball game of the season, though the thunderstorm that passed over us lingered in DC and the game ended up being delayed, then ended early. This was okay with me because I got to watch the final episode of Blindspot, which I thought was great until the half-assed ambiguous ending which always just feels like watching showy masturbation by the head writer, which the smug series creator interviews just emphasize. I'm in the mood for frogs and didn't see one on our walk, so here are some from the canal: 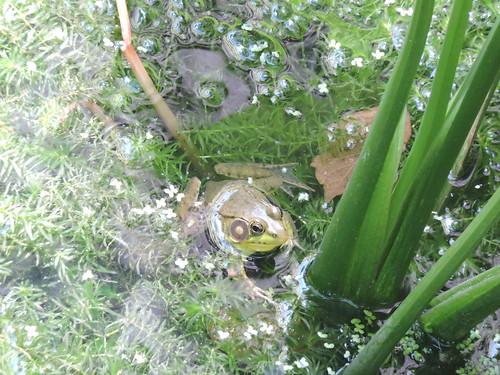