Pokemon Go Fest took place globally from 10-8 on Saturday, so I spent a lot of the day catching Pokemon and doing raids. In the morning, pursuing companions to take on a Groudon, I discovered another neighbor who plays, though he's going to be a freshman in high school so I didn't suggest swapping numbers or anything to coordinate raids. Now I have lots of G and O Unowns and plenty of Durants to trade, and there's an entirely different part of the event on Sunday, so we'll see what spawns in the morning. Paul and I took a walk in Cabin John Park, which has lots of Pokestops and gyms, and saw deer and many squirrels too.

In the evening after the Os had beaten the Red Sox and the Nats had beaten the Yankees, we watched My Spy, which felt like a movie written for Dwayne Johnson but starring Dave Bautista and was overall quite entertaining (flying Bechdel pass, reasonably interesting women or at least no less dimensional than the pretty predictable guys, pretty obnoxious gay stereotypes that an unexpected twist doesn't really redeem, very good child actor who makes up for a lot). Just a few photos of Pokemon, deer, a bunny, and a beautiful beaded mask holder my sister sent me, made by her friend who owns 100PercentBeads: 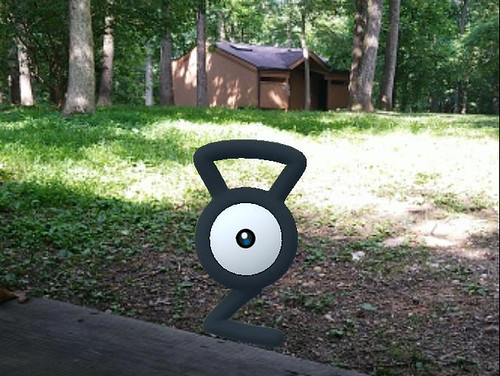