We had a calm Wednesday around here, though I have several friends -- and my sister -- in New York and Connecticut who still have no power and I feel terrible for them because we got it so easy from the hurricane. I sorted several years' worth of beach photos from both Delaware and the Outer Banks and organized a bunch of writing, and took a walk during which I was delighted to discover that my neighbors who had moved away for a year to work elsewhere are settling back in!

We watched the near-final episodes of The 100 and Agents of SHIELD, both of which are having really good final seasons so I'll be sad to see them go although it's also definitely time. (Indra better survive and thrive, and Daisy had better too.) In between we watched Rise of the Mammals on PBS, which was fascinating. Here are some photos of the water court in the center of Glenstone's main pavilion, which has fish, frogs, dragonflies, and at this time of year many grasshoppers: 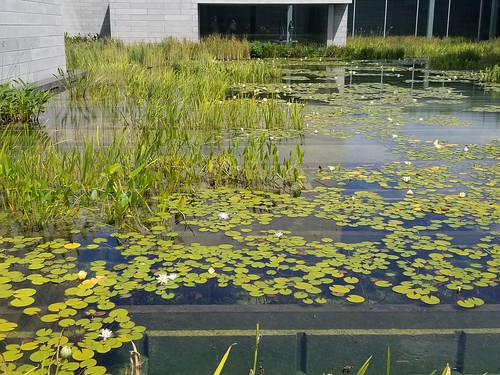