Another late night watching live post-convention coverage after watching the Democratic convention, which had lots of lovely moments -- Biden's speech focused on specific things we can accomplish and things we must change, several of his former competitors from Sanders to Warren to Yang talking to Booker with a unified goal if not a unified vision of the party to stop the narrative that the Democrats aren't united enough to get things done -- and very proud to read about Kamala's fundraising after her speech last night.

We had a quiet day around here until late afternoon, when we had a Zoom call with my uncle, two of my west coast cousins and some of their family members, my parents, my sister, and one of my nieces, which was also lovely. We didn't watch any mindless entertainment but watching the Steve Bannon story unfold was, I must admit, a pure delight. Yesterday was a busy day for deer in the neighborhood and three fawns along the woods path: 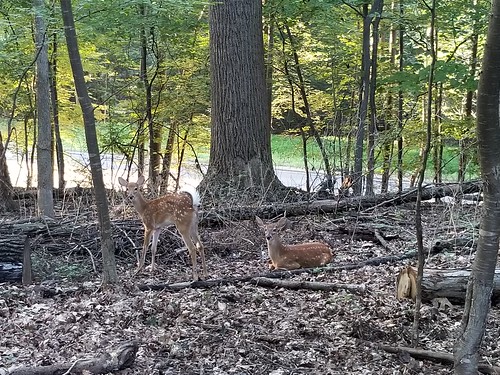