I don't even know where Tuesday went, apart from an hour looking for a photo that I never found despite checking all three floors of the house, so I'll just jump to evening, when we watched the film of The Deep Blue Sea because I wanted to watch it after having seen the recording of the play with Helen McCrory. For some reason I found the characters easier to relate to in the film, maybe because the ages seemed more appropriate for the characters (Rachel Weisz seems closer in age to Tom Hiddleston than Simon Russell Beale even though she's actually 11 years older than the former and 9 years younger than the latter) and the subplot with the expecting couple was cut in favor of more background with the husband and his mother. Plus it felt less strictly British -- there was more yelling and crying -- despite more obvious visual metaphors for rebuilding after the war. Meanwhile it's late and I can't even with the RNC so have some Pennyfield Lock turtles: 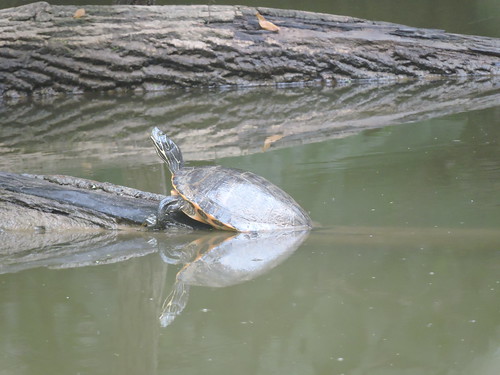