It has been such a wrenching, exhausting day just keeping up with the news and I didn't pay a single moment of attention to the Repugnicans -- I went from looking at California wildfire maps to Gulf Coast hurricane maps, from being outraged at Washington football as the other piece of the sexual harassment story came out to being so proud of the athletes who refused to play in the wake not only of an entirely unjustified shooting but a murderous teenager with a gun being treated better by police than any number of innocent black victims, from trying to keep up with the latest rising covid numbers to being relieved that my county has now passed even stricter mask laws.

So yeah, apart from washing towels and cat blankets, finishing up an overdue writing project, and taking a walk in the late afternoon (it was a one-bunny, no-frog day), I did not get much done. We spent the evening after the Nationals game watching ESPN cover the sporting events not being played and listening to the players and coaches talk about what this fourth anniversary of Kaepernick's initial protest meant to them and why they felt it was so important to disrupt games as usual now. I hope everyone in coastal surge areas has gotten to safety. My brain is fried so here's some of my dice collection, which I'm afraid has grown in isolation despite having no one to play DnD with: 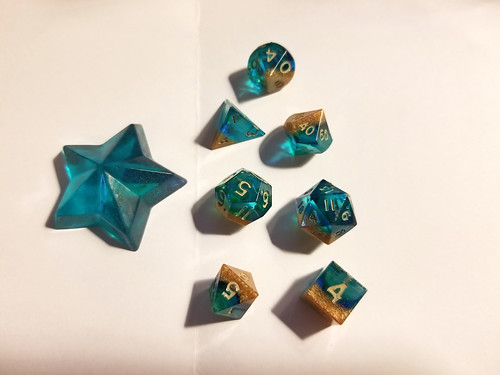