I am behind on everything but I learned something on Tuesday! I had so many video files that I needed to move some to a second external drive to plug into the computer and blu-ray player, and I spent many hours doing so after getting a WD 1TB drive that as far as I could tell was completely identical to the WD 1TB drive I already owned, though I bought it a couple of years later. My blu-ray player couldn't read it -- not the files on it, but the drive itself. I checked to make sure it wasn't an NTFS vs FAT formatting issue, but they were identical NTFS-formatted drives and as far as I could tell, every other setting (hidden files, privacy, etc.) was identical. The only difference was that one had a really short code while the other had a really long one on the partition type ID, and by chance I noticed in an article that that meant one was a MBR drive while the other was a GPT drive. I had never heard of this difference before, but apparently my 9-year-old blu-ray player can't read GPT, because once I understood the difference and reformatted the newer drive as MBR, it worked with the blu-ray player!

So that is where a ridiculous number of hours of my day went, and I don't understand why every article trying to answer the question, "Why can't my Sony blu-ray player read my USB drive?" doesn't suggest checking the partition type as well as the file system, but now I know something about the history of files systems and security and drive partitions, which I will hopefully never need again, ha. The only other things I did of note were watch the fan fiction Alexander Siddig and Andrew Robinson performed as Bashir and Garak while in lockdown, which is a thing of beauty and a joy forever, and find Aerodactyls in my neighborhood while out walking, which is a fun rarity. After dinner, we watched Marshall, which is excellent -- I learned something from that too, that the University of Maryland did not desegregate until Thurgood Marshall brought a suit against the law school -- and while I was sorry it didn't cover more of his life and career, I really enjoyed his interaction with Sam Friedman. I''m just going to provide a single find-the-two-or-possibly-three-photobombing-frogs photos tonight: 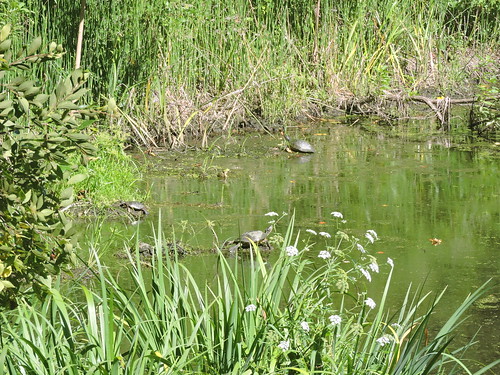