My Wednesday was pretty quiet except for lunchtime, when I talked to two of my high school friends (the third who usually joins is a professor swamped with the first week of classes). Each of them still has an adult child at home, whereas my kids are in a scary fire zone -- Adam said the sky is orange over San Francisco and Daniel's girlfriend sent me a photo of the fires on a hill near the house. Paul's brother Jon, who lives in Oregon, is also close to the fires, and his wife Brooke posted scary photos that I thought at first had an orange Halloween filter.

We took a walk during a break in the late afternoon drizzle, during which I took a break from the walk to do a Pokemon raid with a neighbor and her son. It had gotten late, so we had leftover pizza for dinner. The final season of The 100 is back on and I'm really tired of it focusing so much on the boys, so I'm not at all sad about the apparent death of one and the possible death of another. Then we watched more Away, which has some silly elements but I'm still enjoying. Here are some flowers from Brookside Gardens last weekend: 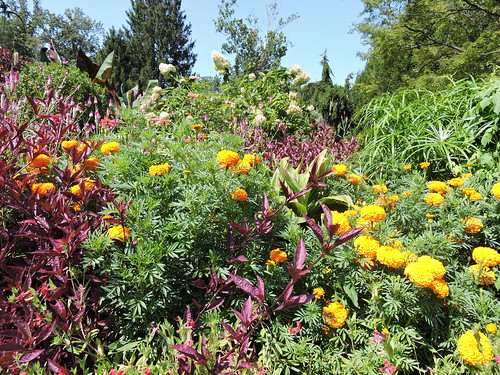