Saturday was a gorgeous day, breezy and clear. I did a bunch of chores in the morning, then after lunch we went to Black Hill Regional Park, which had a surprising number of cars in the parking lot and seemed to be having an event in the public picnic area, but didn't have a lot of people by the lake except at the boat launch and had mostly masked families on the trail -- just one biker. I only saw a bald eagle right after we got there, flying over the visitor center too fast for me to get a photo, but we saw lots of other birds including a green heron and a baby copperhead practically tripped Paul on the trail (don't click through the photos if you don't want to see a snake)! 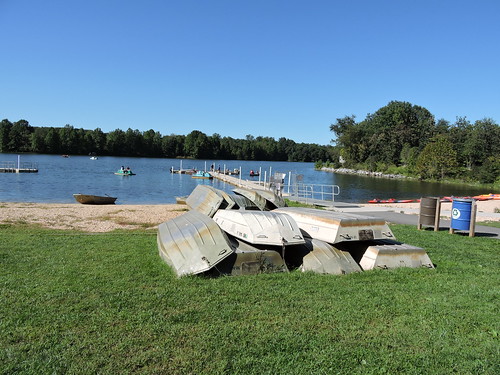 We had the rest of the leftover Asian food from last weekend for dinner, then we watched A Bear Named Winnie, which is based on the story of the bear in the London Zoo who inspired A.A. Milne to write Winnie the Pooh. Before Winnie was in the zoo, she was brought to England by a Canadian cavalry regiment whose veterinarian had rescued the young bear and named her Winnipeg. Being a family movie, there wasn't a lot of World War I in the movie, but being a World War I drama, it was a lot of "we were soldiers together" and I really thought Michael Fassbender and his timid best friend Jonathon Young might get married and adopt the bear before remembering that it was a WWI movie.
Collapse