It was a lovely, overcast Saturday, so after lunch we went to Huntley Meadows in Fairfax County, which we haven't visited all year. We saw a muskrat almost as soon as we got to the boardwalk, though it was diving in and out of plants in the water and then swam off so it was hard to photograph! Then we walked around the wetlands (almost no cattails this year, there are other flowering plants and lots of trees turning already) and saw many herons, egrets, turtles, ducks, a couple of kingfishers, and some splashing far away that turned out to be another (or perhaps the same) muskrat: 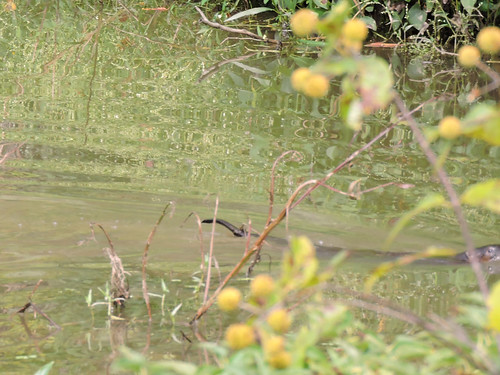 Saturday was also Daniel's birthday, so we came home for pizza, then Skyped with him and his girlfriend Kayla, whom he's visiting for the weekend, plus Adam (now looking for jobs in Seattle) and Katherine (who started her new job this week) and my parents. Afterward we watched the new episode of The Boys (I was really ready for Homelander to break Stormfront's neck, so of course they're in love instead) and I was subjected to several hours of college football, including a game I'm pretty sure Virginia Tech won by a lot over NC State although half the Hokies are out with coronavirus.
Collapse