Sunday was another gorgeous day, a little warmer and overcast. It was also the last day the Maryland Zoo's southern white rhinoceros, Stubby, was going to be in his exhibit there before moving to a wildlife conservancy in Florida with other rhinos, since his companion died last year and he has been lonely. So we went to the zoo, which is admitting people in limited numbers and requiring masks in all the places people tend to stand around, so since most of the indoor facilities, the tram, and the rides were closed, we went to the outdoor exhibits and saw the penguin colony, the African animals, the Maryland animals, and the polar and grizzly bears, plus Stubby: 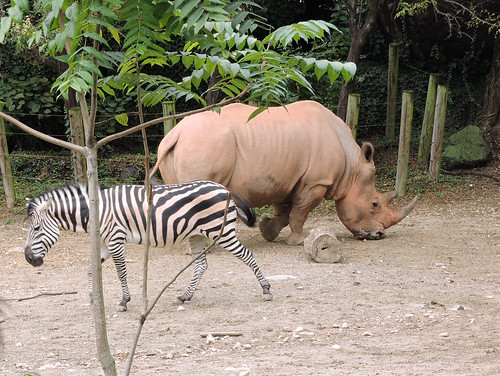 We came home in the late afternoon. I chatted with fannish friends on Zoom for a while while the Seahawks were doing everything in their power to lose to Dallas though they didn't quite manage it, which I discussed via text with older son, a Seattle fan, who was watching with his girlfriend's father, a Cowboys fan. We had dinner and watched some of the Packers-Saints game, also pretty sloppy, around Last Week Tonight, in which John Oliver was his usual optimistic self, so now I'm watching Mr. Popper's Penguins since the penguins were much happier than John Oliver.
Collapse