I had an unexpectedly nice morning because my friend Alice had an appointment in Bethesda and called afterward to see if I wanted to meet her for coffee. We got Starbucks and went for a walk in Cabin John Park in gorgeous weather. Paul didn't have afternoon phone conferences, so he worked in front of the World Series and I half-watched as well while trying to catch up on various computer work.

After dinner we watched The 100 finale. It's insane and out of sync with the rest of the show -- most of the human race should have let ALIE save them in the City of Light and spare them a lot of grief -- but Clarke, Octavia, Indra, and Raven all got a happy ending which is all I cared about! I really did not like Donald Trump, I mean Sheidheda, calling for war, but Indra and Octavia stopped him, so it's all good.

Earlier we took a walk around the neighborhood in the drizzle that started in the evening, had Indian food for dinner, and watched some more Schitt's Creek, which is a fine antidote to the news, the general state of the world, and people being selfish jerks both locally and nationally. Here are some photos of seagulls that we saw last weekend -- we were hoping to go to Fenwick this weekend but can't get cat-sitting. 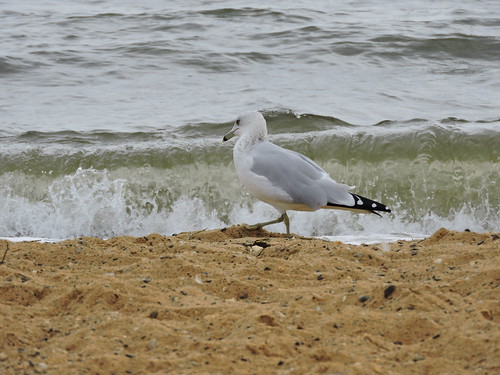