I had to get up early for blood tests and a flu shot on Tuesday -- on an empty stomach -- and the office was an even bigger disaster than usual with an older woman crying because they wouldn't let her inside since she arrived five minutes early, so I have been a bit headachy and sleepy most of the day and did not accomplish much. Most of the excitement in my life was taking place across the country, where Adam and Katherine took their dog Pepper on a plane to Seattle, where they will be living and working, not at all sorry to be leaving San Francisco.

We watched baseball most of the afternoon and evening, with a break to take a walk and to watch Voyager with my friends from when it first aired. Now I'm watching Catching Fire -- I watched The Hunger Games over the past two nights -- because I find the whole franchise hopeful. Here are some photos of Pepper's trip from her empty apartment to the airport to her new home in the Seattle suburbs! 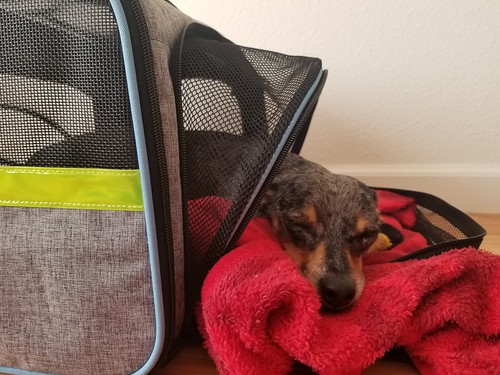