It was overcast all day on Sunday, though we didn't get out until after our bagels and schmears for brunch because younger son gave us and my parents a tour via Skype of his new townhouse and car in Seattle, both of which look lovely. Older son even woke up to join the call, and we got to see how much Pepper is enjoying having so much more space. (Apparently she went for a walk in the afternoon, but it was raining, which she did not appreciate.)

Our rain did not arrive until mid-afternoon. This was convenient because we wanted to go to the Countryside Artisans Tour at various farms and studios around Sugarloaf Mountain. We started at Breezy Hill Farm, which has alpacas and their fiber products plus lots of chickens, then we went to Heron's Meadow tea farm, Something Earthy pottery studio and farm with goats, and Art of Fire glassblowing. Sadly, we ran late and didn't get to Dancing Leaf Farm.

We came home in the rain, watched some of the Cowboys game (saw Dak Prescott's injury, which reminded me why I'm trying not to watch football), had dinner, watched most of the Seahawks game including the extremely exciting last five minutes, then watched some early third season Schitt's Creek which we should probably spread out more because I'm going to be so sad when we've finished it. Paul is off tomorrow, hoping the rain stops! 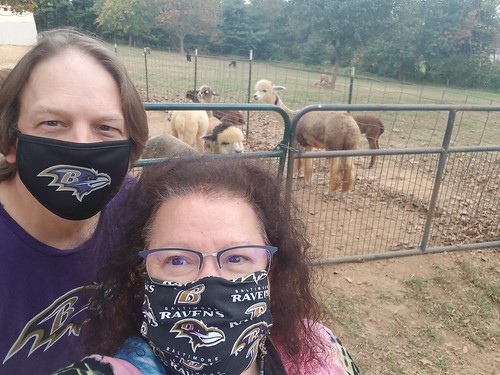