Summer came back for a while on Friday -- we had temperatures in the low 80s. I took a long walk in the morning, retracing my steps from Thursday, and in one of those small miracles, I found my lost earring! It was not in the woods as I expected but on the sidewalk a few yards away from where the path comes out of the woods, so it wasn't buried in leaves on asphalt but instead quite bright among a few scattered leaves on concrete. So that felt lucky.

Paul had meetings that went long earlier in the week so only had to work half a day. So after lunch, we went to Sugarloaf Mountain, where the leaves are still pretty thick -- so thick that they still obscure the overlooks in spots. Then we went to the canal, figuring it was probably the last day to see frogs -- I had seen one in the neighbor's pond in the morning -- and we saw several, plus turtles and a gorgeous sunset (more photos soon, just one frog): 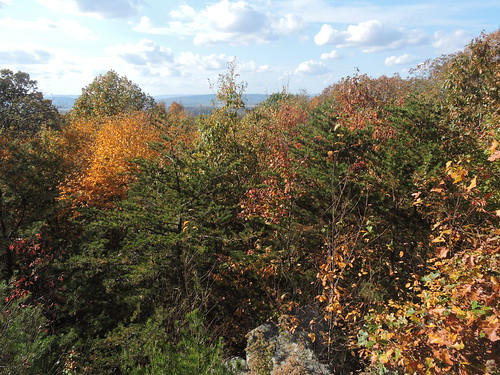 I stopped on the way to the canal for two Galarian Ponyta raids, plus a couple of remote ones with Denise while they were around for the special Pokemon Go event, and managed to evolve one Sirfetch'd -- I can't get ten excellent throws in fewer than 10 hours of constant attempts! We watched the Dodgers beat the Rays, then watched two episodes of Schitt's Creek -- I think we only have four left, waaaaah, then will need a new binge!
Collapse