It was 75 degrees on Sunday, like even November wanted to celebrate the election results. So we ate lunch early and went to the National Arboretum to see the changing leaves on all the plants there. The parking lots were packed, but the grounds are so big that it was easy to socially distance -- the places where people would need to be in close proximity, like the bonsai pavilions and azalea walk, are closed, and for the most part everyone was wearing a mask properly. We drove by Hadley Park on the way home to see the trees there, too. 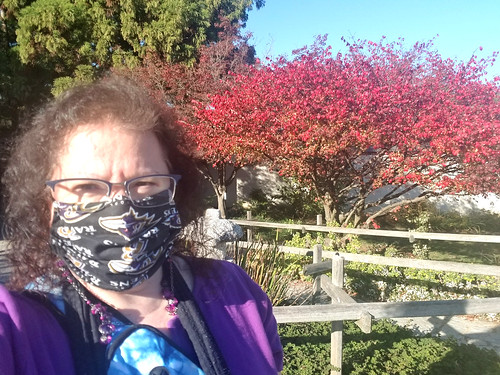 My fan friends were online chatting when I got home; I talked to them for a couple of hours, then ate dinner and tracked down our kids to Skype (younger son had just returned from an off-leash dog park near the mountains east of Lake Sammamish, and was cooking dinner, while older son was already eating fried chicken). Then we watched a couple of episodes of Sex Education around the end of the Tampa Bay game, which I did not care about at all, since I don't care about sports this year and anyway the Ravens had already won. I need a less emotional week.
Collapse