I had a fairly quiet Sunday, mostly because the forecast all week called for rain but we got maybe 20 minutes of rain -- unfortunately beginning right when we arrived at Locust Grove to walk in the woods, so we cut that off and came back home, though we ended up walking around the neighborhood when no more rain materialized. It was a Pokemon Go Community Day, so I also caught some shiny Electabuzz, and our awesome neighbors brought us Moroccan couscous. We Skyped with Daniel and his girlfriend with my parents, I chatted online with fannish friends, then we had dinner with my parents, which was a bit chaotic because CPK abruptly canceled the delivery! My mom came through with leftovers and we watched some football.

Afterward, we came home and watched the first two episodes of The Crown this season, which was a weird experience because Gillian Anderson had me liking Margaret Thatcher (!). I thought my favorite scenes would be between Thatcher and the Queen, but Helena Bonham Carter's Margaret snarking at Thatcher is utterly magnificent. I feel like the writers got bored with the Queen once she wasn't young and sexy and are barely bothering with her, which is really sad for Olivia Colman who is just not getting great scenes. Now I'm watching A Knight for Christmas, an even worse Christmas princess movie starring Vanessa Hudgens than The Princess Switch! Roddy Road, Loy's Station, and Utica Covered Bridges in Frederick County: 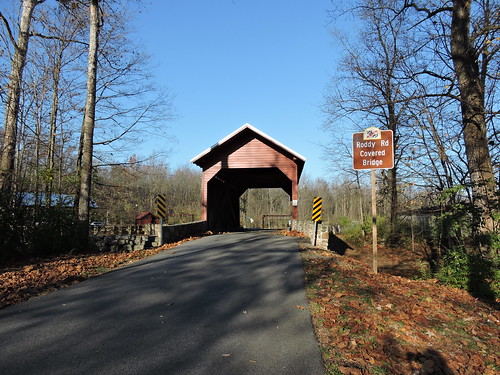