That song goes with The Crown this week as well as SPN. My Thursday was pretty quiet. I spent most of the morning upstairs, sorting clothes that need to be given away, putting away laundry, and organizing various things. We didn't have lunch till about 2. Apart from a walk in the woods, most of the rest of my day was fannish, which was a fun flashback to days of yore. I watched the pretty mediocre Voyager episode "Emanations" with my rewatch group, meeting Thursday this week because someone had a Tuesday conflict.

Then I watched the Supernatural finale, which seemed pretty terrible to me, although since I've seen maybe 8 episodes of the show's 15 seasons, I'm not really entitled to an opinion. I have watched the convention episode, the fan fiction musical, the "stuck in TV genre shows" episode, the Dean-and-Sam-switch-with-Jensen-and-Jared episode, which are some of the most fun TV ever, and after the finale we tracked down the "Scoobynatural" animated crossover episode, which is magnificent. Some Marys at the Emmitsburg Grotto of Lourdes: 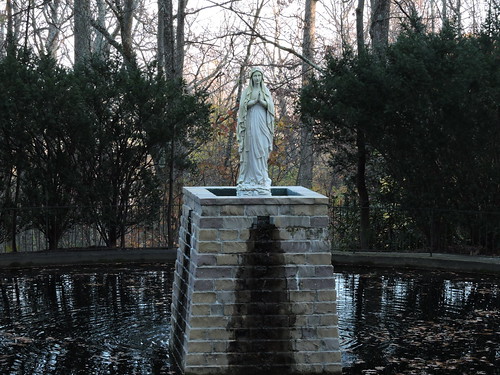