Monday was a Monday -- things that had to get done, laundry, a new fuzzy heated blanket on the couch that made the cats suspicious until they started fighting over it. The weather was gorgeous and

apaulled had a conference call in the late afternoon so we took a walk early, where we saw lots of squirrels and sparrows and one bunny hiding under a neighbor's bush. Also, this happened to what's left of our jack-o-lantern. 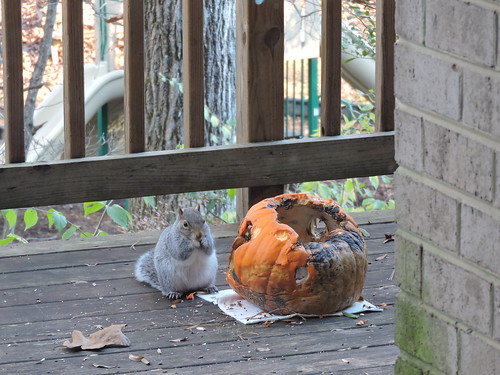 There was mixed good news -- terrible coronavirus numbers and my governor being half-assed about shutting things down, but everyone besides Trump has finally declared it over, which will make it harder for him to start a war to stay in office and Biden has the makings of a cabinet. We watched Antiques Roadshow, then the second half of the Bucs-Rams game, and now The Fate of the Furious is destroying my remaining brain cells.
Collapse