It was 70 degrees on Thursday, for which I heartily give thanks. We watched the scaled-back Macy's parade to see the musical numbers, then we had an early lunch (anticipating a big dinner) and went to walk along the C&O Canal, where the turtles apparently did not remember that winter was coming and were out sunning on logs while the ducks enjoyed the duckweed. Then we came home to clean up and went to my parents' for dinner -- I mostly ate the side dishes, which are my favorites -- and watched Washington beat Dallas.

We came home to connect Paul's parents and Skyped with them, my parents, and our kids, who were celebrating Thanksgiving together at Daniel's girlfriend's house; we'd talked to my sister earlier with my parents. Afterward (and after The Masked Singer, which for some reason they moved to Thursday), we watched Jersey Boys because we've never seen it (it's okay, not great, though I enjoyed the music). I didn't manage to upload the canal photos yet so here are a few of our Thanksgiving and our kids' Thanksgiving: 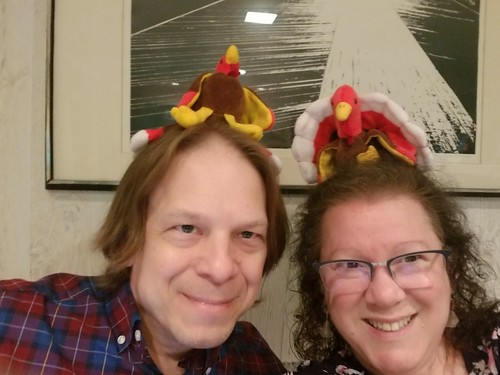