We had pouring rain all morning and most of the afternoon, which made it easy to do nothing but work and chores, at least once I turned on my light therapy lamp so I could wake up properly. World Market finally sent an email telling me that my order was ready, so we went to pick it up from one of their curbside spots, but after waiting 15 minutes, the delivery guy brought out someone else's order and we had to wait for them to find the right one. Ah well, at least I have my tea, though they were out of Paul's chocolate covered blueberries.

It stopped raining just before it got dark, so we took a walk -- the deer and bunnies were both out, but it was too dark to take pictures of them -- then we had Scotch broth for St. Andrew's Day and watched The Disney Holiday Singalong, which was mostly mediocre but had P!nk singing with her daughter and Chloe x Halle doing "Let It Go" together, then we watched the Seattle-Philly game which had some terrible decisions but at least the Seahawks won (the Ravens and their coronavirus should be barred from playing this week). Seneca Creek's holiday lights being set up: 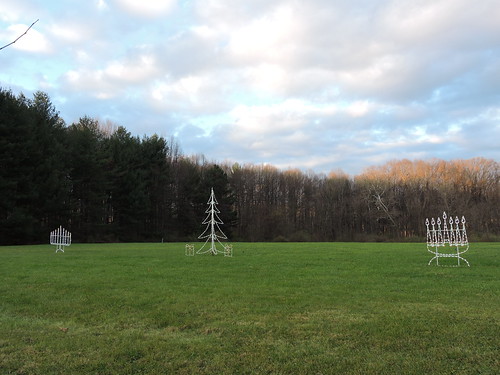