Thursday, like Wednesday, was chilly and calm. I spent a lot of hours doing something ridiculous -- okay, to get to Pokemon Go level 41, you have to catch 200 Pokemon in a single day, which can only be done using incense and spending way too much time catching everything in sight, and I figured that since Gen 6 just started to appear, I could catch enough to evolve the new starters -- I even made Paul walk in Cabin John Park again so I could look for a new Froakie, though I didn't find one.

We had leftover macaroni casserole for dinner, saw a bit of college basketball, then watched Mary Poppins Returns, which is moderately entertaining but extremely predictable; Blunt starchy, Lin-Manuel Miranda showing limited range as an actor, Meryl Streep doing an icky Roma parody with an accent as bad as Dick Van Dyke's in the original, kids watered down versions of the ones from Peter Pan, not enough Jane and her politics. At least it has Colin Firth! Turtles at the C&O Canal the last warm weekend: 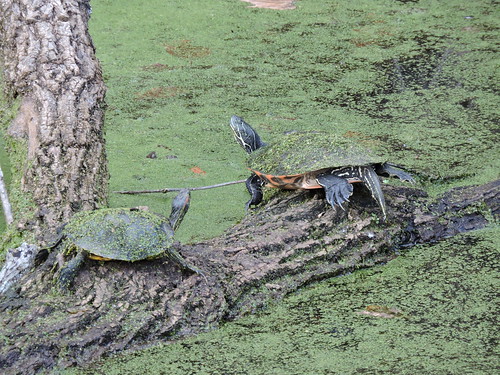