Saturday was a lovely cool partially overcast day. We went on the Countryside Artisans winter tour -- Dancing Leaf Farm with sheep and fiber crafts, MudPi pottery studio at Heron’s Meadow Farm which produces tea, Art of Fire glass studio with visiting wood turner from the Maryland Renfaire, Breezy Hill Farm alpacas, sheep, donkey, chickens, and fiber crafts, Something Earthy farm with goats and guineafowl plus angry cat, pottery and fiber crafts, and a stop at Roots Market to pick up vegan smoked salmon, vegan beef jerky, and vegan ham which it turned out they were out of. We had dinner with my parents delivered from California Pizza Kitchen. 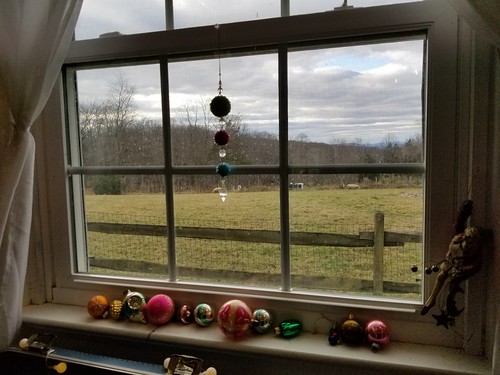 We needed to stop at CVS to pick up a prescription for Paul, which ended up taking so long that we got our second Shingrix shots while there. Then we came home and watched Godmothered, which on a scale of silly seasonal and princess movies I have watched this season was pretty good. I don't get the reviews that say it's Enchanted minus the charm, since the "charm" of Enchanted is sexist creepiness in which men want virgins with great singing voices who remind them of their innocent daughters. Godmothered could use more diversity but it's all about women, is overtly queer-friendly by Disney standards, and lets the anti-Amy Adams, Isla Fisher, be a grownup!
Collapse